Some quick notes about the weekend!

I fell down a near interminable rabbit hole of Unreal Engine 4 tutorial videos this weekend, and watched no less than 26 videos (each about 10-16 minutes long).  The results?  I’ve rigged up our mech in-engine, with textures, materials, animations, sounds and even some fun controller support!  I’m working on getting our three-stage charge jump, as well as some ADS (Aim Down Sights for you non-Call of Duty folk out there) stuff with the left trigger.  Next steps will be weapons – I am working on integrating the stellar SciFi particle pack from the UE Marketplace, and then I’ll start tying the FX into the event blueprints (making the shooter bits look and act like shooter bits). 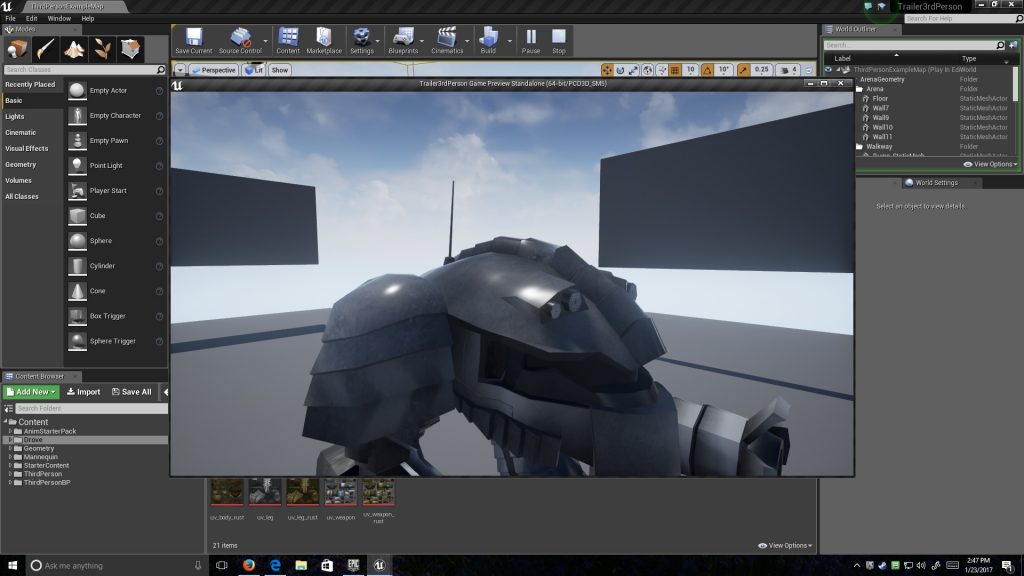 I don’t want to over-represent my skills here – Youtube is a damn-near magical place, and combined with a healthy dose of German stubbornness and some old programming knowledge, I was able to get all this taped together and working.  It isn’t a standalone game, just running inside the editor, but hopefully I’ll be able to export my work to Richard so he can use it for the trailer cuts he’ll be working on.  I don’t believe I’ll be trying to spend any time on making this a full multiplayer experience – that’s work far better performed by a programmer.  Still, it feels great to have things that our amazing team have worked on realized on my PC screen.  I am truly in the company of genius.

After talking with Richard about what he needs for a successful trailer, I’ll get back into the editor and complete some additional items.  As we hit more major milestones, I’ll pass them along as well.