What’s In A Mech

As I started compiling all of the various thoughts around what I’d like to share with you about Entity: Outlier, and our journey towards its final project status, I started organizing those thoughts into what things will drive the identity of our game.  I’m sure that this will evolve over the course of development, but there are a few undeniable items on that list.  The first of these is our mech, referred to in our universe as a Drove.  As I thought through all of the various…um…thoughts I’ve had when collaborating* on the design of our Drove, I figured the best starting point might be the inspirations I’ve had growing up.

My first stop was a simply stunning Palladium role-playing book: Robotech The Role-Playing Game.  I had many great experiences playing table-top role-playing games in my youth, but this book captured my imagination in ways that few did.

I had watched a handful of Robotech cartoons growing up, and loved them, but the art in this book expanded my appreciation of what a mech could be in a battle scenario.  Looking at pictures of Veritech fighters, the Cyclones, and even some of the truly clever Destroid designs (the Excalibur and Spartan were two of my favorites), I was enraptured by how much personality and menace could go into these drawings, making every single one feel like a machine built for war.  I was also stunned by the deep considerations around how humans (or Zentradi et al) would be able to interface with this technology, making them suits of deadly armor for the wearer. 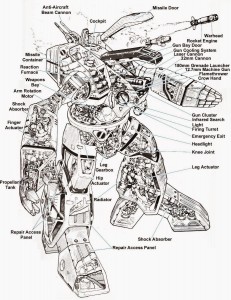 While a huge quantity of my tabletop days were spent with D&D (Dragonlance and a bit of Dark Sun, for those keeping count), I would constantly gravitate back to this book for its ability to transport me to the Macross universe with a handful of black & white drawings (in truth, all of the Robotech series RPG books were outstanding works of art, but we’re talking about mechs…)

A short while later I was honored with a viewing of the 1987 Paul Verhoeven classic RoboCop.  Tomes could be written (and have been) on the merits of this classic, but to bring it centered on our mech discussion, I was blown away by the 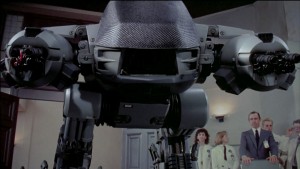 ED-209’s brief but scary introduction to the universe.  The lumbering stop-motion walk and no-nonsense design was a great blend of function and violence, and rather unprecedented in my limited world view at the time.  Using a scale model for the scenes in the movie also produced an integrated, dare I say realistic, portrayal of what a mech would feel like when folded into the real world, demonstrating scale and materials that are easily identifiable with our own sensibilities.  Finally, it proved a capable opponent for our protagonist’s maneuverability, giving a futuristic take on the eternal battle between speed and power.

I could go on for quite some time about some of the other inspirations I drew from when I approached our art team, but I think it might be best for me to share some of their concept work as we settled on a final design.  Here are a few of the many pieces of artwork put together by the team as we started designing our take on a mech. 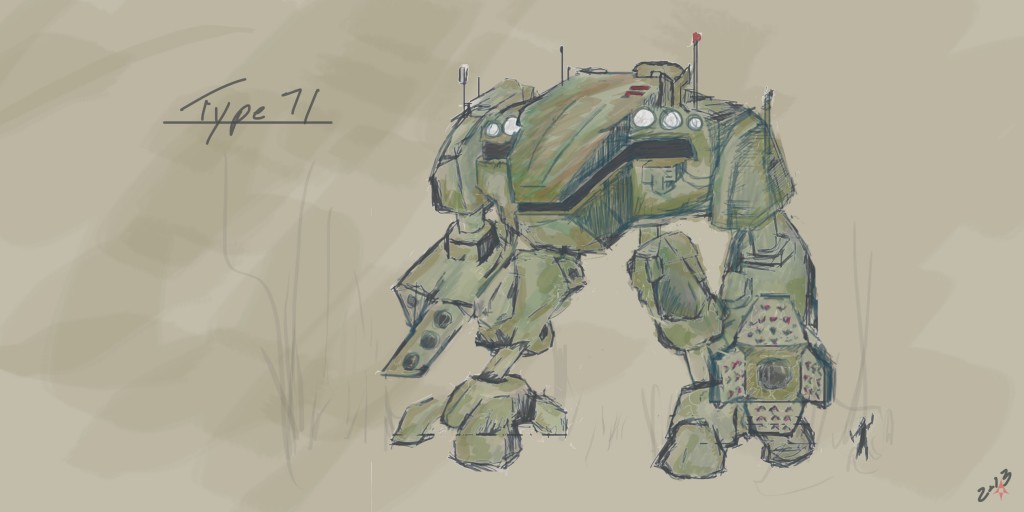 The very first sketch of our Drove.  This incorporated every last bit of feedback for our initial design, and it served as a focal point for future designs.  Credit: Angel Martinez. 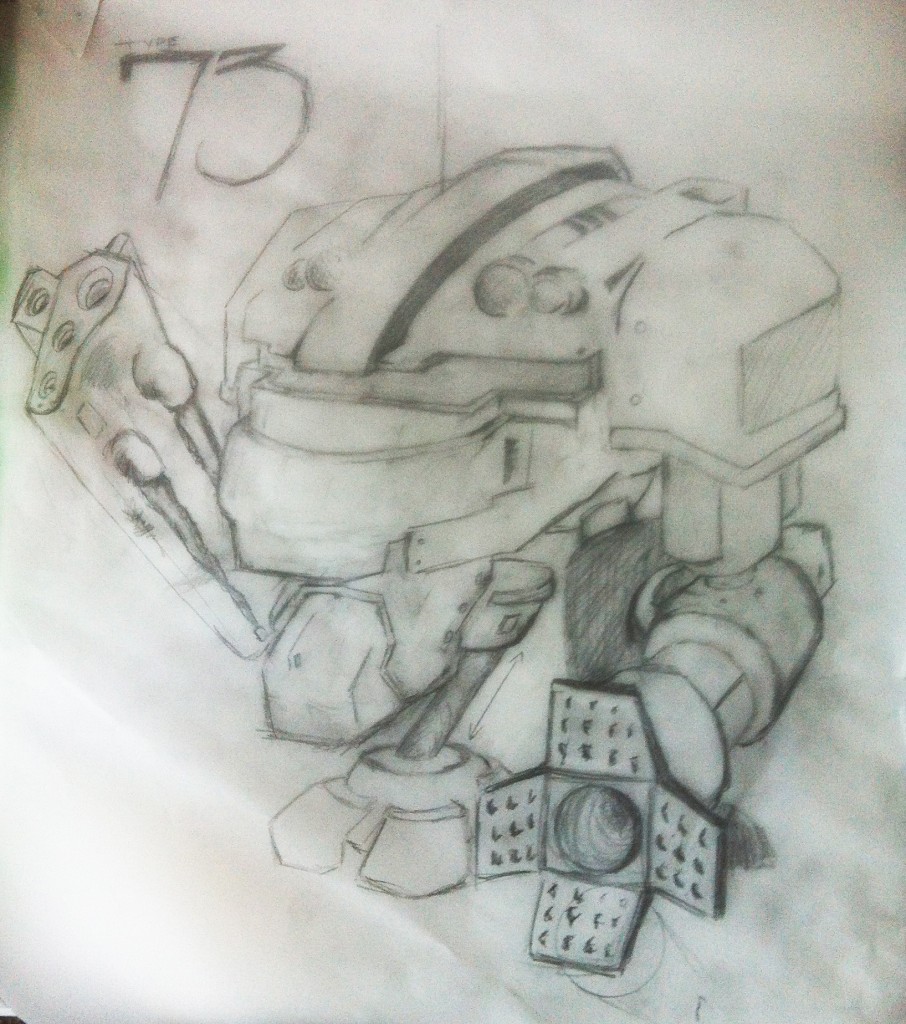 Our next revision added a few small bits of feedback, and the all-important inclusion of “chicken legs”.  Credit: Angel Martinez 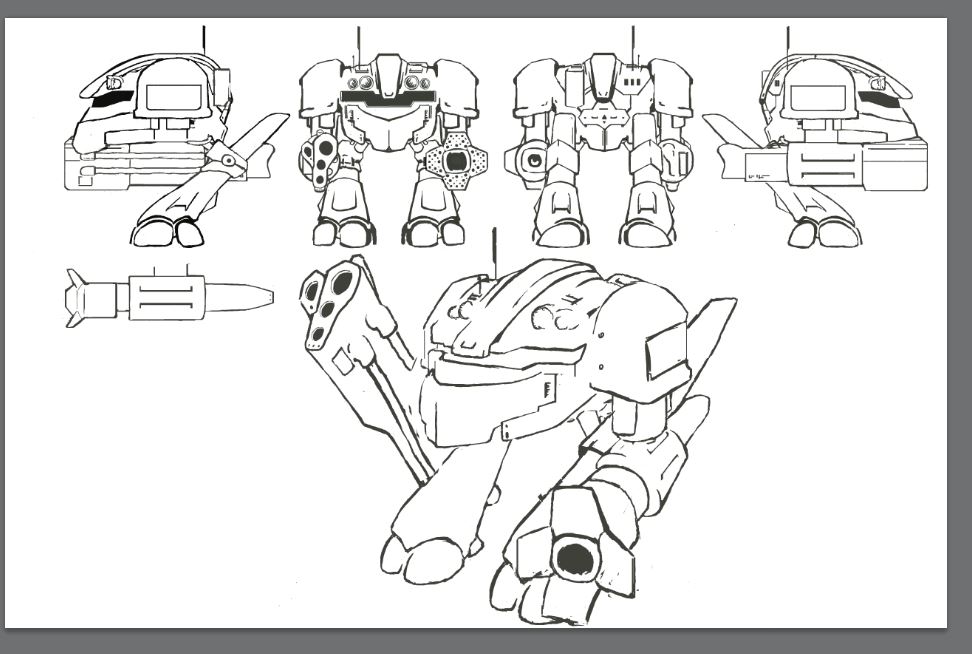 A few profile and head-on views as we got ready to deliver the design to a 3D artist.  Credit: Angel Martinez 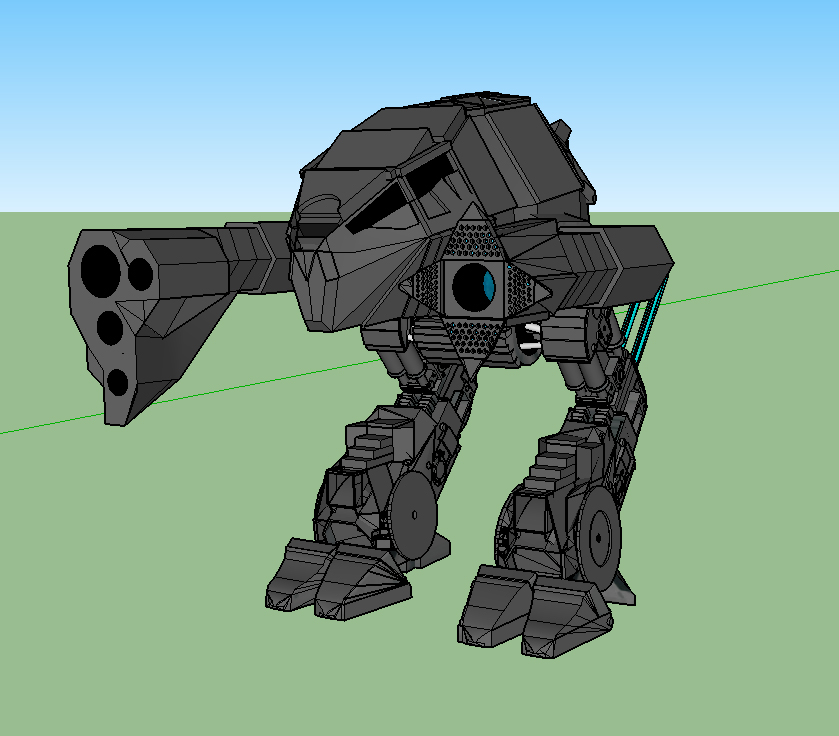 A 3D mockup (done in SketchUp) as we worked through some additional design ideas.  Credit: Richard Schmid

I hope you enjoyed an abridged romp through our initial design phases of the Drove.  I look forward to sharing the final design and rendering as we get closer to unveiling gameplay.

Thanks for tuning in,

* – I use the term “collaborating” quite loosely here, since the real work must be directly attributed to the crazy-talented artists that have volunteered their time to bring our work to life.  I mean to reference this particular point and footnote regularly throughout these posts, since it is always unequivocally the truth.